Being your man’s man is definitely different than being your woman’s man, one cannot elaborate nor argue.

Your man, or his, is something very rare to find. Not every guy you date is really your man, nor you are his.

Definitely the existence of love plays a major role but is it really the only thing that matters?! No, not really…

Being your man’s man, is when you connect to someone that doesn’t question any behavior of yours. Well we’re not talking about when you’re being inconsiderate. No. We’re talking about when he puts in you the feeling that no matter what you do his feelings towards you would remain the same.

You know, you don’t feel that he’s judging you in every and each single thing you do.

The things you say would not feel awkward to him. He listens to you, and even if he doesn’t agree, he embraces your thoughts without having to show you a wrecked face, nor the ultimate surprise reaction of a horror show.

Mostly, he’d consider you a goodhearted person, well you have to be at a minimum. He would go with the process of discovering you without picking up on every single detail. He would understand if you tend to have a shocking way of expression based on the inner need for being a Diva and an Attention Seeker.

He invites you to dinner, without making you feel that you owe him one back. He doesn’t care if you invite him back.

You sit with him in a constant flow of dialogue. Even when you both are silent, you feel there is a discussion going on. You don’t endure the heaviness of silence with him.

Your man sleeps by your side, he doesn’t let you know you were snoring every single time you do while you’re asleep, he moves out of bed and heads to sleep on the couch letting you snore as much as you need…

If you wake up in a grumpy mood, he tends to soften you. If he has to wake you up, he does it in the most loving way.

He cares to know the things that bug you, he tries to avoid them when you point them out. He doesn’t have to change, well no-one does, yet he adapts because he wants to be a source of happiness in your life, not a source of stress.

He makes you feel that it’s allowed to be wrong sometimes, what is right anyway?!

He gives you space of time and place to acknowledge it, and apologize when you realize you’ve been a jerk.

Your man, is caring, he surrounds you with a shield of security. He makes you feel you’re a better person than the one you thought you were.

He protects you when you’re weak. You know these moments where you feel the highest walls of the world are crashing on you crane. He tells you how beautiful and sweet person you are when you feel you’re the ugliest person born with the most evil soul on earth.

He tells you, everything looks beautiful on you although you believe somewhere in your heart that your clothing taste fucks up sometimes.

If you stink?! He tells you your body odors are better than any perfume in the world, or he can mention showering together, without making you endure his facial expressions screaming out of disgust.

Your man protects you, as he thinks you protect him. He thinks that you are born to be together, and no one has the bond you both have.

He laughs at your bad jokes, he can be annoying sometimes, yet you find it cute.

When he smiles, you feel you’ve been deported to a better world. Things seem happier.

He watches you eating, your no manners look adorable to him.

Your sexual freakishness is allowed with your man, he’s ready to explore it with you, he can reject it if he doesn’t like it later on, yet most probably he’d do it for you…

Your man makes you feel loved, oh yes he does. In a way that you just don’t care if everyone else hate you.

Your man is shy, even if he’s comfortable with you. He draws a genuine limit of respect, whatever that means.

Being his man makes you feel unique, having the best man around. You’re not any man’s man.

You being his man is his source of joy, and you’re his little precious.

Your man is your equal, there is no supremacy going on.

Everything that applies to you on the level of privileges, seem to be an inner commitment to be the same for him.

Being you man’s man, is a two way relation. He is your man, and you are his. 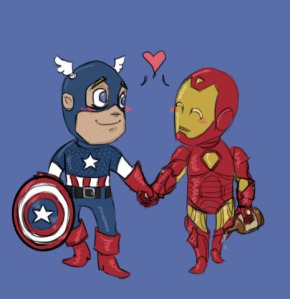